We started hearing about a new drug to control the itch of allergic dermatitis and canine atopic dermatitis in dogs over 1 year of age at the Vancouver World Congress of Veterinary Dermatology. The research showed some amazing findings. Like most veterinary dermatologists, I was eager to try it in my practice. I started prescribing (oclacitinib) Apoquel® for itchy dogs at SkinVet Clinic in November 2013. As of August 2014, I had treated over 100 dogs with Apoquel.

Dogs with skin allergies can have skin lesions and odor, but the thing that is most troublesome to pet parents (and the dogs!) is the itch that can make them miserable. At SkinVet Clinic, we ask pet owners to grade their dog’s itch level at each examination using a validated visual analog scale (0 – 10). While this is the best method that we have had to grade itch in practice, it gives an incomplete picture of itch severity over time. Soon, pet owners and veterinarians will be able to easily record and view a more complete itch diary using the Itchology app for iPhones (see www.itchology.com for more info and to sign up to get notified when it is released).

This graph shows the owner-reported itch level of dogs before 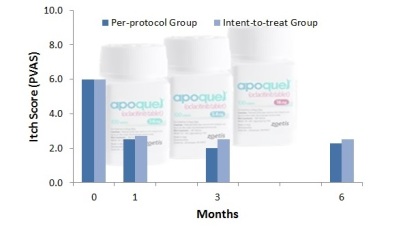 treatment and after 1, 3 and 6 months. Both per-protocol data (dogs returned for recommended follow-up examinations at 1, 3, and 6 months) and intent-to-treat (ITT) data (previous value carried forward when dogs did not return for examinations or medication was discontinued) are shown.

These findings are remarkable, considering that most of the dogs began taking Apoquel during cooler, winter months and follow-up examinations more often occurred during warmer months, when many dogs with allergies would be flaring up. Further, as this was not a rigorous clinical trial, the day 0 itch level was often recorded while the dogs were still taking other medications – from prednisone to Atopica®. (These were discontinued for three days prior to the owner initiating Apoquel, in most cases.) Therefore, it is likely that the day 0 itch level reported here was slightly lower than it would have been with a medication wash-out period.

All in all, Apoquel has performed as expected in my hands. Check back to read my next post concerning Apoquel side effects. And, don’t forget to visit www.itchology.com to sign up for Itchology, a must-have app to help your vet help your itchy pet!